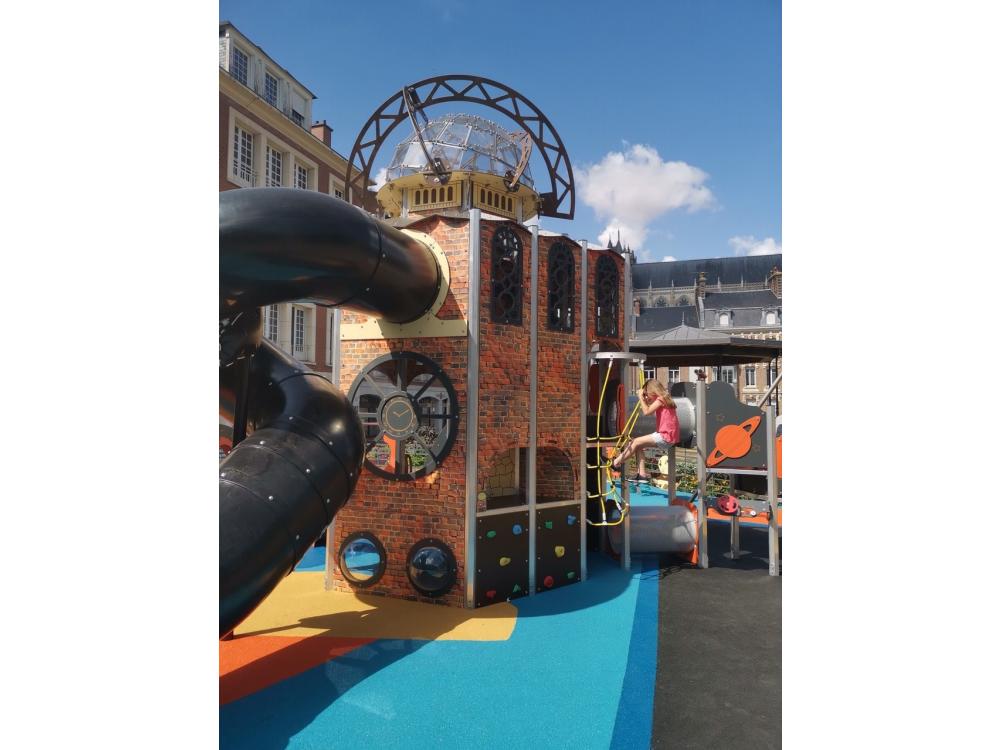 A new playground for Amiens

Installed at the heart of the city center, the outdoor playground of Square Jules Bocquet has just been inaugurated.  Inspired by the world of Jules Verne, this playground displays an original design, a bit futuristic and faithful to the original novel. Thanks to its expertise, QUALI-Cité® has been able to offer play equipment for collective use, both playful and educational, that are largely inspired by the books of Jules Verne, which are full of science and technology, but also of a large dose of imagination.

An extraordinary tower of fun

Master piece of the playground, this structure topped by a lookout (CT 25-2001-99) reminds the «home of inventions» where Jules Verne lived since 1873, now turned into a museum. This magnificent tower of 5.30 meter high is a maze in which children from 2 to 14 years old can evolve according to their age. True physical activity trail, this tower is very playful with its multiple accesses, climbing walls, crawl-through tunnels, sliding pole, and its 10 meters long zip-line… It also has several manipulation panels including one with the tic-tac-toe game, which stimulates children’s reflection.

Customized play equipment to discover Jules Verne and its universe

A track game arouse the curiosity of children thanks to an educative panel (MO PL-04-0011-06) introducing four of the most emblematic novels of Jules Verne. Through clues, children play detective in order to associate books to play equipment on the esplanade !

Immediate boarding for going « Around the World in 80 Days » in the plane CV 020-99 coming from the range City Vehicles. In the control station, apprentice pilots from 1 to 6 years old have fun with a lot manipulative panels and take off in the direction of marvelous adventures!

Several octopus (RE 307-26 and RE 288-99) mounted on springers are also in this outdoor playground and reminds « Twenty Thousand Leagues Under the Sea ». A replica of the Nautilus submarine (CV 018-06) completes this mythic universe.

Just the time to take a break « From the Earth to the Moon » in the space rocket MO CH-0004-98 before leaving for a souvenir photo shoot with the play panel MO PL-04-0010-16. For a few moments, young and olds take the pose to put themselves in the shoes of Amélia and Jules, two great contemporary explorers of Jules Verne.

What extraordinary journeys in perspective !